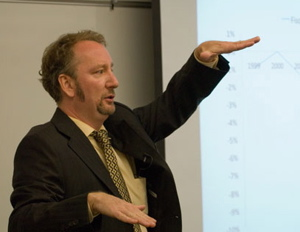 I subscribe, via rss, to Christopher Lydon’s Radio Open Source. Truth is, I delete most of the interviews before listening, and I don’t get around to listening very often (as you’ll see in a moment). Lydon isn’t the greatest interviewer in the world, but he has great guests more often than most of these programs. So it is with Mark Blyth.

I just listened to an interview with Blyth from December 2010 (see? told you.), which I now see is the first of eight so far. Go thou and do likewise, is mostly what I have to say.

People want to say: look at those profligate governments, spending all that money. We’ve got to restore fiscal sanity. But it wasn’t fiscal insanity that got us here. It was private-sector leverage and the insanity of banking that brought us to this point. So the bankers put it on the state, and the state turned around it put it on the taxpayer. It’s the biggest bait-and-switch in human history.

Now to listen to the other seven.