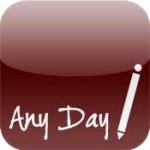 The aforementioned Any Day Journal (for iPhone) is now up to version 1.1, with a website and everything.

The changes are in the interest of making the user experience more efficient: fewer touches or other actions are needed to get the most common tasks done. I’m quite pleased with the improvements.

An example: in version 1.0, after adding a photo to the journal, you’d add a caption by tapping an Edit button at the top of the screen, then a “disclosure” button to the right of the photo, and finally tapping the text area of the resulting screen to bring up the keyboard.

In version 1.1, you simply touch the space to the right of the photo (which is where the caption appears) and start typing. That’s one touch instead of three, but the real difference is at once more subtle and more important: you directly touch the thing you want to change (the caption area) rather than touching a sequence of control buttons. That’s an essential aspect of the iPhone’s touch interface, and it’s not just fewer touches, but more intuitive ones.

Been thinking of starting a journal? Today is a good day for it.